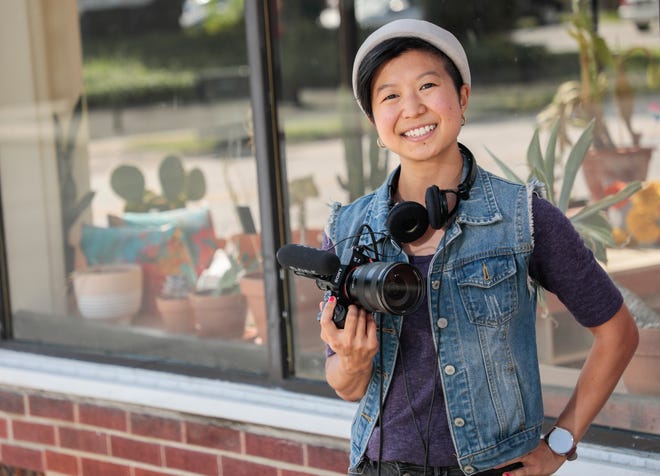 As a videographer, Anita Kwan’s office changes with the days.

Seeing her portfolio is taking a trip from bike studios and bakeries to manufacturing factories and street dancing.

But whatever the mission, Kwan seeks to capture authentic moments and uplift marginalized communities when she can.

“I really deepened my values,” said Kwan, 33, of South Side, who founded Reel Hoot Productions five years ago. “I was thinking about what I really care about, which is working with women, people of color and the LGTBQ community, basically everything that I encompass. There just isn’t as much media coverage or videos from people like me. So I intentionally wanted to shed some light and show how awesome we are. “

Specializing in brand, event and corporate videos, Kwan has clients all over the country. In the Columbus area, she shot a crowdfunding video for Heartfelt Cycle Studio, an inclusive, gay-owned business near Grandview Heights. She also shot a branded video for Bake Me Happy, an LGBTQ-owned, female-owned, black-owned gluten-free bakery in Merion Village.

In a broader landscape of the film industry, women represent only 19% of directors on broadcast network programs and 31% on streaming programs, according to the Center for the Study of Women in Television & Film.

“As for the video, the people behind the camera are mostly cishet white males (cisgender, straight),” Kwan said. “They don’t necessarily know all the places and where to go to get the stories. “

“We were documenting people having fun in their TransTape, playing in the pool, mowing the lawn, chopping wood, being by the fire and just having fun, looking comfortable in the product,” a- she declared. “I was also doing tutorials on how to apply the tape and remove it safely.”

Beyond niche companies, Kwan has worked for larger companies like Tide Cleaners, T. Marzetti Co., CoverMyMeds, and Mount Carmel Health System. She also collaborated on a documentary, “Kings, Queens, & In-Betweens”, and shot footage for a body-positive collective the Fat Babes Club of Columbus for today’s show.

Decades ago, Kwan’s dad was a videographer at his home in Middleburg Heights, northeast Ohio. She remembers filming family events on every birthday, holiday, and vacation with an old camcorder.

“My dad wasn’t trying to be artistic or anything,” she said. “It was just a matter of documenting everything in one shot. I just got comfortable with a camera. He let me hold him when I was little. He was very brave.

As he got older, Kwan began borrowing his father’s camera to make videos with friends in college, including Katie Ashwill Allen.

“We recreated a lot of movies that were already out there and loved putting our own twist on them,” said Ashwill Allen, 33, of Oberlin. “I remember we were trying to recreate scenes from ‘Donnie Darko.’ ‘Napoleon Dynamite’ was another. His parents had this projector in the basement. We went there often, just filming silly music videos. “

Kwan said she realized she had a talent when her teachers started encouraging her work. She then studied cinema at Ohio State University. After graduating, she and a friend started their own video business, This is Columbus, documenting things to do in the city.

“I always have videos in my files and it’s so much fun to watch because everything is so bad,” Kwan said. “We did this for about a year because we weren’t making any money. We weren’t really good with the whole part of the business plan.

Kwan spent several years as a wedding photographer. Later, she was fired from a small video company. She decided to start another business after a series of interviews at other video companies.

“I felt like I didn’t really fit in every time I walked into these offices,” she said. “They were cishets, dominated by white men. And during the interview process, I sometimes felt like I was getting burned. It didn’t do me good. I was like, ‘I think I’ll just do my own thing.’ “

“Most of my mentors were men, and I felt 100% like it was a boys’ club,” said Menduni, 37, of Hilliard, who owns video production company, Mkg Dept. . “I haven’t had any opportunities and I haven’t been listening. That’s what really motivates me to want to have diversity behind the camera.”

“Anita is my go-to person for videography,” Menduni said. “She thinks through moments and details, and I really like that perspective because it just lends itself to deeper, more creative storytelling and connecting with the audience.”

Kwan said working with the Ohio Progressive Asian Women’s Leadership organization was particularly meaningful. She spoke with people from Asia to the United States about their struggles with the immigration process.

“It was amazing to hear the stories from these people,” said Kwan, who is of Chinese descent. “And I was able to identify with them too. I felt like, “OK, my business matters. This organization felt comfortable hiring me because of what I represent and what I represent.

She and Anna Hetzel are co-founders of Business & Queer Professionals, an online organization for queer women, trans and gender nonconforming people. About 100 people around the world have joined the community, which hosts events every month.

While it is vital for members of the LGTBQ community to engage with each other, it is also important that others provide support, especially by sponsoring LGBTQ-owned businesses.

“We are struggling with resources and finances,” Kwan said. “And people are spending money in businesses and franchises. We have our community, but it’s just not enough. We need allies to come and support us.