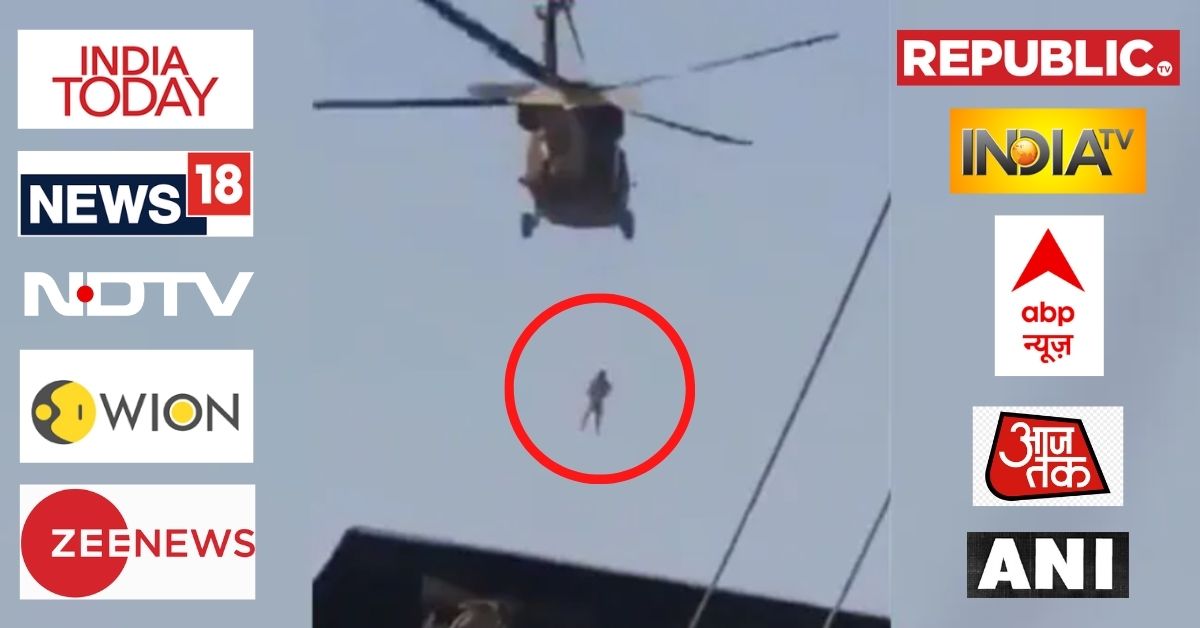 The United States completed its withdrawal from Afghanistan on August 30, marking the end of two decades of conflict. The United States has reportedly abandoned military equipment, and those that have not been dismantled have been taken over by the Taliban.

A video of the Taliban parading a helicopter in the skies of Kandahar is massively viral on social media. Media and reporters claimed the video showed the Taliban hanging a person, presumably an American interpreter, from an American Black Hawk helicopter. Below is a tweet from Zee News editor Sudhir Chaudhary.

Another striking image taking the world into a new era of terror.
The Taliban hang a person, believed to be an American interpreter, from an American Blackhawk helicopter.
The remaining US helicopters will now be used in #Afganistan like that. pic.twitter.com/8q6C5bo4IB

The claim was also promoted by the editor of India Today Shiv Aroor who shared an article from their point of sale.

With a keyword search on Twitter in Pashto, we came across the following tweets which confirmed that the helicopters were flying in Kandahar.

Using ‘Kandahar’ as a keyword in Pashto, we found another video of a man hanging from a helicopter. This is a clearer video.

If you look closely, the rope can be seen tied to the man’s back. It hangs from a harness and not from a noose around the neck.

Additionally, in the same video, the man can also be seen gesturing, especially from 15 seconds on. He is not dead contrary to what is suggested on the Internet.

Local journalist Sadiqullah Afghan also posted one of the videos showing a man hanging from a helicopter. He informed that the man was a Talib and that he was trying to put a flag on a 100-meter pole.

Another Afghan journalist tweeted that he knew the Afghan pilot who was flying the helicopter. He identified the man hanging from the helicopter as a Taliban member attempting to install the flag of the extremist Islamist group but without success.

The Afghan pilot in command is someone I have known for years. He was trained in the United States and the United Arab Emirates, he confirmed to me that he was flying the Blackhawk helicopter. The Taliban fighter seen here was trying to put up the Taliban flag from the air but it didn’t work in the end. https://t.co/wnF8ep1zEl

A keyword search on Facebook using کندهار ولایت مقام (Kandahar province) led to a video of a man hovering over a flag pole. The post said the Taliban were trying to hoist their flag at the governor’s office. In this video, too, the man is clearly alive. He’s also trying to get something out of his pockets.

A similar video was shared by a local reporter from Kandahar Arghand abdulmanan.

It should be noted that disinformation is viral across the world, including New York Post. From what it seems, the video gained attention after it was posted by @ natsecjeff1. However, he made no complaints when sharing the clip. Another user @Holbornlolz who identifies as a comedian added the spin “man hanged from a helicopter”. Washington Post fact-checker Glenn Kessler tweeted about how the account was twisted on the internet.

This is how things get twisted on the internet. You know that image of the Taliban supposedly hanging someone from a BlackHawk helicopter, tweeted everywhere? Just invented. Not that the video is from “FJ” – @ natsecjeff1 But that’s not what his original video said … pic.twitter.com/Swb0FIGmXR

The media and journalists spread false information claiming that an American interpreter was hanged to death on a Black Hawk helicopter by the Taliban. The man was a member of the Taliban and he was trying to put up the uniform’s flag on poles. He was not hanged but hung from a harness. It should also be noted that the US Department of Defense has yet to comment on the video, so it could not be established that the helicopter was indeed a Black Hawk.

Donate to Alt News!
Independent journalism that tells the truth in power and is free from corporate and political control is only possible when people contribute to the same. Please consider making a donation to support this anti-misinformation and disinformation effort.

To make an instant donation, click on the “Donate Now” button above. For more information on donating by bank transfer / check / DD, click here.

Fact Check: Does the video show Taliban “hanging” a body from a helicopter?