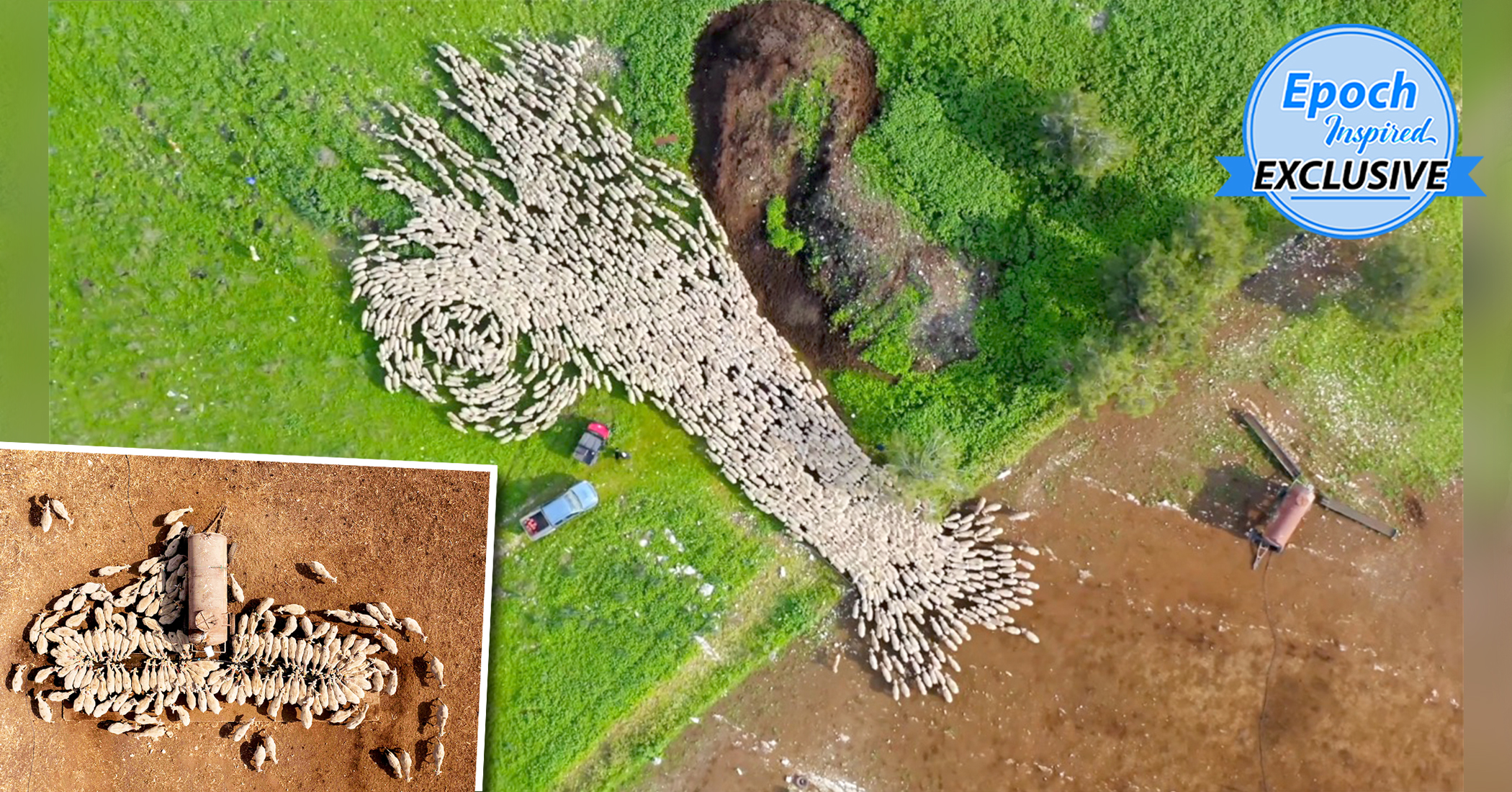 The shepherd is not an instant art. In an age of high speed and quick gratification, shepherding remains a patient task, as is the work of an Israeli. drone videographer who, for seven months, captured the movement of a herd of sheep.

The result of Lior Patel’s efforts was a bird’s-eye view of meticulous, swirling motion across the floor; a dizzying prospect of a stream of carefully guarded sheep that has mesmerized netizens around the world.

In an interview with The Epoch Times, the 42-year-old from Haifa said he fell in love with photography 15 years ago when his brother bought him a digital camera.

For Patel, taking pictures was pure pleasure. After four years, a major exhibition showed an urban snapshot he had taken five minutes from his home. Encouraged, Patel said he continued to photograph for fun and participated in exhibitions around the world.

Eventually, with the advent of drone cameras in the world, Patel purchased his first drone camera.

“The idea of ​​adding a new perspective to my shots was fantastic,” he said.

Intrigued by the beauty of fluid camera movement using the drone, Patel’s interest in the field of video blossomed. He had an entirely new set of tools to learn in order to depict his subjects using movement and aerial perspective. Patel then got his license from the Israel Aviation Authority and shifted his career to become a full-time drone videographer.

While working as a commercial drone videographer, Patel still made time to have fun with his art.

“I also enjoyed filming for myself, searching, driving, searching for projects for my soul,” he said.

His curiosity and interest led him to sheep and the shepherd, having had experience photographing small flocks before realizing there was a “fantastic movement to represent”. However, Patel knew he needed a bigger herd, and so, with the help of some farming connections, he was put in touch with a shepherd.

Patel was invited “with open arms” to visit the shepherd’s flock. On January 2, 2021, Patel went to a green hill next to Yokneam in Peace Valley.

Within the first 10 seconds of having his drone in the air, Patel recognized true beauty.

“The movement I saw was mind-blowing,” he explained. “The challenge of figuring out how they will spread across the field and cluster together (with the help of 5 border collies)… amazed me that day.”

By the end of the visit, Patel knew this topic needed more attention. After chatting with the shepherd over a cup of coffee, he learned that the herd’s grazing was cyclical. The sheep were moved from their winter pasture to a summer location when the green winter grass dried out. After the conversation, Patel was asked to follow the herd with his drone to capture the various formations that were about to ensue.

The project would be a time-consuming undertaking as Patel wanted to film the full range of seasonal shifts and location changes. The full cycle could bring Patel in July.

However, he was unscrupulous in front of the frenetic pace of the project. He accepted the hospitable invitation to visit and made his way to the herd time after time and month after month with his drone.

It followed balletic formations as sheep moved across open fields, crossed roads, passed through gates and invaded feeding areas. He and his drone camera watched the lush green grasses of winter turn into the dry yellows of the Israeli summer.

At the end of June 2021, Patel realized the grazing cycle was over, and his next challenge was what to do with seven months of footage. His goal was to present something that showcased the natural beauty of the herd’s innate movement, uninterrupted by the movement of the camera.

So, in the end, he took snippets of each month of his images, accelerated the movement speed, and opened the images wide on his screen.

“I loved the result,” he said.

Patel has shared his work with clients, family and friends on Facebook and Instagram. Encouraged by the comments he received, he posted the footage on a local photography and nature page and was surprised at the attention it got.

“I was happy that a few other people found the same beauty in it as I did,” Patel said.

Within two hours of sharing her clip, her video went viral. “My feed was blocked, my social media notifications stopped working, I just couldn’t keep up with all the incoming traffic,” he said.

By then, his patient project had taken the internet by storm. In the days that followed, magazines, media groups and research institutes around the world caught wind of the footage. Not only did his work inspire others to appreciate the natural beauty that Patel himself had seen, but he also sparked international interest in his videos for scientific research and studies of crowd movement.

Although overwhelmed by all the attention he received, Patel still took the opportunity to share his story, hoping “to inspire others to explore and open up to long-term projects. term in a world addicted to all that is instantaneous”.

Additionally, Patel recently created the clip as an NFT and released it for sale.

Share your stories with us at [email protected], and keep getting your daily dose of inspiration by signing up for the Bright newsletter at TheEpochTimes.com/newsletter