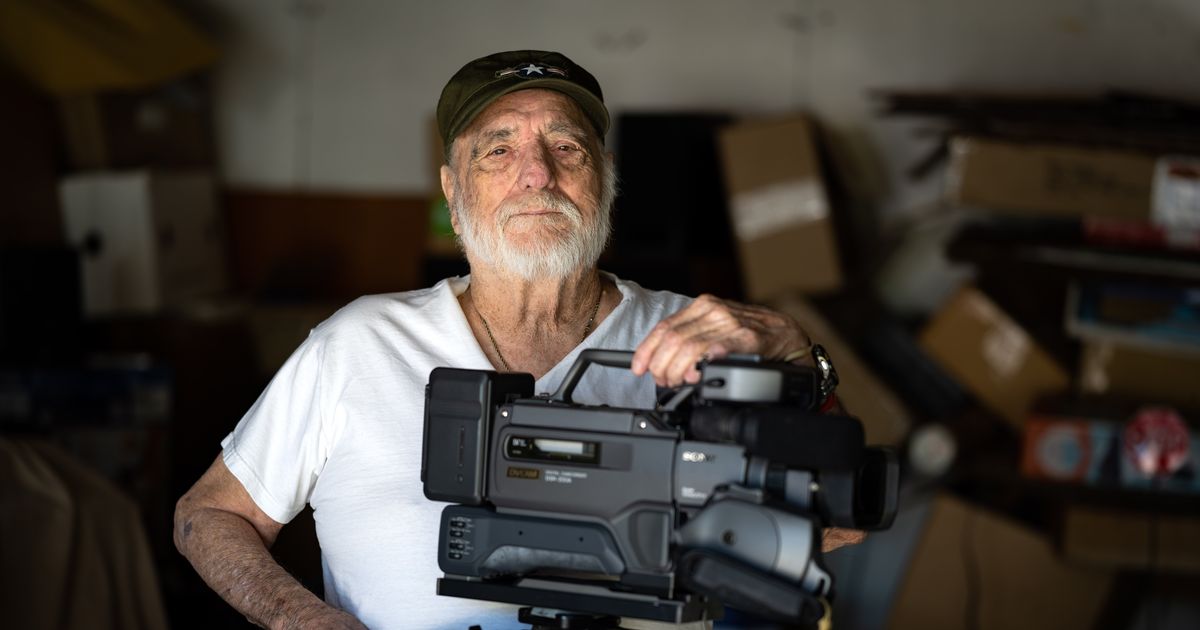 “A long time ago I got into filmmaking and wanted to make my own films,” he said.

After a stint in the Air Force, he took courses in auto mechanics at a community college in Alameda, California. It was there that he met a guy who worked for a local television station. When Fitzgerald saw a newspaper ad for a 16mm camera, he took his buddy with him to check it out.

The purchase launched a hobby that quickly became a passion project.

“It was in the early 70s,” he says. “Bob gave me a movie that the station couldn’t use,” Fitzgerald said.

He bought some film reels and cut the film to the size he needed.

“Then I shot everything that moved,” he said. “Car races, boat races, air races, frog jumping contests. Bob developed the film for me.

Fitzgerald kept his day job as a mechanic for Del Monte Foods, but spent most of his free time filming California life.

When the video cameras came out, he quickly bought himself one. Now he could record sound as well as action.

He began filming camel races in Virginia City, Nevada, and quickly became a regular at the annual event. The races evolved into the international camel and ostrich races and began as a prank between two newspaper editors over 60 years ago. Fitzgerald rarely missed one, but at 82 he started to slow down.

When he retired from Del Monte, he and his wife, Barbara, moved to Gresham, Oregon.

“I drove to the nearest public television station and volunteered,” Fitzgerald said. “Then I had my own show.”

He has filmed community events and senior theater productions. Over time, he became more interested in talking to people than filming the action.

“It amazes me,” he said. “The things people do, the difficult situations they find themselves in and how they survive.”

When he and Barbara moved to Elko, Nevada, he continued filming.

“I went to the museum and volunteered to film senior biographies,” Fitzgerald said. “Several women did the interviews, and I filmed them.”

It was then that he became addicted to recording and preserving personal stories.

“I met a World War II veteran who served 365 days in combat,” he said. “He was in North Africa, in Normandy and at the Battle of the Bulge. He was a tank commander and had three Purple Hearts.

Fitzgerald’s eyes filled with tears as he remembered what had happened to the veteran after the war.

“He was taking flying lessons and his wife and children were on their way to the airfield to pick him up when they were hit by a lorry. They are all dead.

He shook his head.

Speaking of survival, he recorded another World War II veteran who claimed to have saved the life of General George S. Patton.

“He said Patton and his driver drove to the front lines just as a barrage of bombardment occurred,” Fitzgerald said. “The guy yelled at Patton to get out of the jeep and take cover, and when he didn’t move the guy said he pulled him out of the jeep and lay down on him.”

Then there was the farmer from Elko whose grandfather built a ranch with a two-story log cabin and several small cabins for his ranch hands.

“His grandfather brought in teachers for the kids from the East, but he had a hard time keeping them because the cowboys kept marrying them,” he said.

The stories fascinated him, and when he and his wife moved to Spokane 12 years ago, he wanted to keep recording them.

“In the assisted living facilities, they’ve all told their stories to each other and people don’t want to hear them anymore,” Fitzgerald said. “But I do.”

Fitzgerald never wrote a screenplay or shot a movie like he thought he would, but he estimates he has recorded at least 50 biographies of seniors. However, he doesn’t think he will shoot anymore.

“I’m 82 and it sucks,” he said. “I probably won’t be able to film anymore unless I find someone to help me transport the equipment.”

But he’s proud of the stories he’s helped preserve.

“The 90s have seen more than any other generation in history,” he said. “Once they’re gone, you’ll never hear those stories again.”

Tickets on sale for The Photography Show & The Video Show 2022