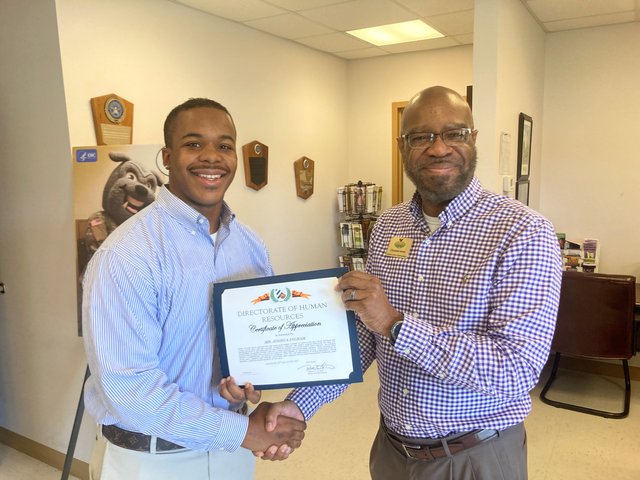 Joshua Ingram, a graduate of the Bradwell Institute and Georgia State University, recently received a Certificate of Appreciation from the Army Substance Abuse Program at Fort Stewart for his videography work. Ingram spent April with the program during its alcohol awareness campaign.

Army Substance Abuse Program Director Chakiris Moss presented Ingram with the certificate, signed by Director of Human Resources Thomas A. Allmon, in a brief ceremony on Wednesday, June 29. He says, “Ingram has dedicated his time and professionalism to the execution of this event. by filming all the events of this campaign. His efforts helped bring awareness to this campaign at Fort Stewart and Hunter Army Airfield. Your contributions have enabled our military and civilians to carry out their mission at the highest level. Your dedication to service is commendable and reflects favorably on you.

“It means the world to me,” Ingram said of receiving the certificate. “I feel like (I) get the BET Award, because you don’t know how many lives you just saved through the video. Now they know more about the alcohol awareness program and to substances.

Ingram is the founder of TheDream ENT LLC, which he launched on May 15, 2020, while living in Atlanta. After graduating from GSU, Ingram started the videography business with the goal of capturing special moments in people’s lives.

“And for business too,” said the sociology major. “And to encourage young people to never give up.”

Ingram brought his business back to his hometown of Hinesville after battling COVID in 2020.

“I live here and I’m ready to work and encourage young people,” he said.

Always looking to hone her skills, Ingram is currently attending Savannah Technical College. He said being back home freed him from distractions.

“To really focus on God’s purpose in my life, and to focus and really study,” he said. “When I got home, it changed my mindset and changed my habits.”

Ingram played football for the BI Tigers and for the GSU as an itinerant athlete. He has previously mentored youngsters at Lithonia High School and said he seeks to do the same for children in Hinesville.

“I want to show them another path other than sports,” he said.

Ingram said it was his Phi Beta Sigma fraternity brother, Nathan Wallace, who helped him connect with the people at the Army’s drug addiction program and win the video gig.

“Sam Daniel is a fantastic basketball player who had a practice session with Dwight Howard,” Ingram said.

Daniel, who is from Camden County but met Ingram when they were both in Atlanta, asked Ingram to film the workouts.

“Dwight Howard saw the videos and he loved them,” Ingram said.

Daniel showed his shooting ability in the videos, averaging 20 points per game in sessions, which led to practice with the Mavericks, Ingram said.

Ingram said he believed God placed this vision in his life, which started when he was watching Netflix one day and wondering why he couldn’t make his own videos.

“Pictures could mean a thousand words,” he said. “But getting the different angles and learning the camera movements can tell a bigger story with more meaning, and I fell in love with it.”

“People don’t capture those moments that happen in the city, and I want to be the person who captures those moments.”

His current mentor, John Grace, is the technical film instructor at STC. Grace has over 25 years of experience in film production, including nearly two decades working as a film and media educator. He co-founded the South-West Institute of Film and Television in 1997. Featured credits include “Better Call Saul”; “Whisky, Tango Foxtrot”; “Breaking Bad”; “The space between us”; “Independence Day – Resurgence”; “Longmire” and many others.

“He taught me everything I needed to know in the film industry,” Ingram said, adding that he recently had the opportunity to work on an active set in Savannah.

“I want young people and children to know that no matter what, you can achieve your goals. Just focus and praise God for making it happen,” he said. “I’m just a humble spirit working as His servant.”

Ingram said he plans to start making shorts in the future.