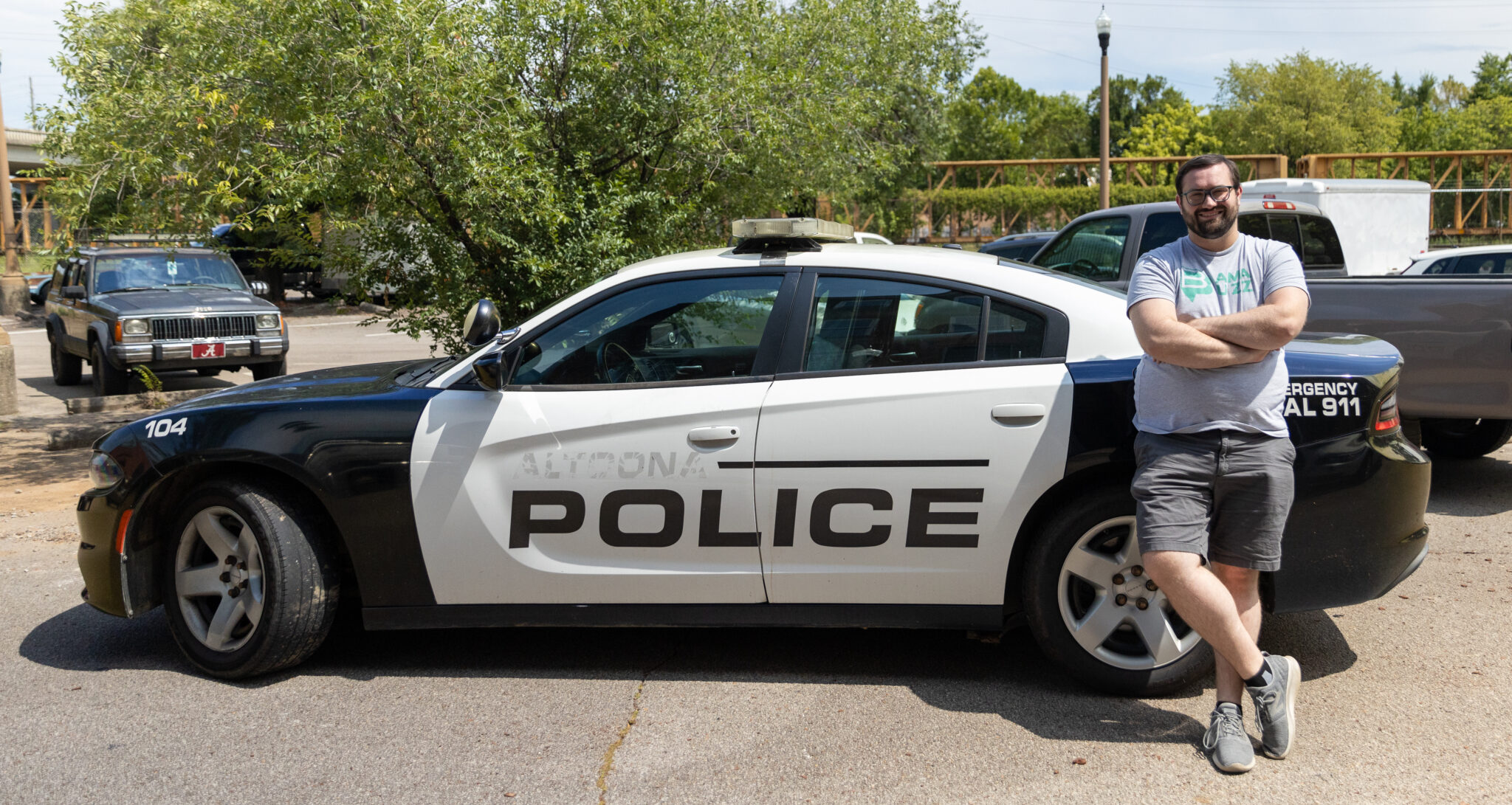 Have you ever wondered what it would be like to buy a police car? Well, our videographer, Ben Johnson, found out for himself. Read on to take a look at all the bells and whistles and find out all about what made him buy the decommissioned police cruiser in the first place.

It’s not every day that you pull into the parking lot at work and see your co-worker get out of a police cruiser. I immediately had to do a double take, and it turns out my eyes didn’t deceive me.

Our team immediately asked Ben a lot of questions, like “Are the sirens working?” and “Does this save you parking tickets?” and above all “How the hell is this legal?” We have all the answers to your burning questions.

First of all… why?

“A few years ago my friends and I were shooting a short film and we needed a police car as a prop. So just for laughs and giggles, I googled ‘Can you buy a used police car?’ and I was shocked to find that police cars are much cheaper than normal used cars because you can’t finance them, you have to pay cash.

Unfortunately, Ben recently had a car accident and needed a new vehicle. He found that the police took out their fleet of vehicles about every five years, and when they did, the taken out cars ended up on auction sites. As a result, Ben was able to score a 2015 Dodge Charger for around $6,900 – you can’t beat that.

With prices soaring and high demand, the used car market is tough to buy right now. Ben considers himself lucky to have found this unique way to buy a car.

Take a look inside

For those of us who haven’t seen the inside of a police cruiser, there are plenty of cool features to check out. Ben’s new ride even has a fully functional spotlight attached to the front that swivels and spins from the inside.

To sell the vehicle, the emergency equipment must be disconnected, so the siren and lights cannot be turned on. However, the fixture for the lights, the cage in the back, the metal plate on which you mount the computer, and even the printer used to print the tickets all remained intact.

To keep things legal, Ben will eventually have to remove all of the police decals and the light fixture on top, but pretty much everything else will remain.

He said that while the fancy features definitely make the car look cool, it’s a lot less comfortable to drive. For example, putting your arm on a ticket printer instead of a central console is not very pleasant. To comply with the law, he intends to repaint it and make the necessary adjustments.

“I’m planning to have it repainted so it doesn’t look so much like a police car. I had the idea to keep it as is, but I noticed that people were slowing down a lot around me. I stopped at a wedding I was filming and everyone was like “what the hell is that”. I ran to a friend’s house and his wife called them and said the cops were out. I don’t like scaring people, so my plan is to have it repainted.

What are the advantages and disadvantages?

“I feel much safer parking literally anywhere. Who’s gonna tow a cop car? It’s also nice not having to worry about people breaking into my car because they might think there’s a dash cam or something, so that’s a plus . There is definitely peace of mind there.

Ben mentioned that more often than not people get out of his lane when he’s driving on the freeway, which is definitely a perk I’d appreciate. As for the cons? Hooking up a police car requires a bit more maintenance than your average used car.

“This car is a little beat up, it’s from Altoona, Alabama, so there’s a lot of mud everywhere. Two of the window switches don’t work very well, to raise and lower the window. When I got the car almost all the dash lights were on so i have to go and have it all checked even still its not a junker.

Ben is a little scared that if he gets pulled over the cops will think he’s trying to impersonate them, which will definitely get you a one-way ride in the back of a real cop car. Fortunately, he bought the car from state officials, and they said that until he turned on the lights and sirens, he should be good to go.

“As long as I don’t pose as a police officer where I try to arrest people, it should be fine. They told me to remove the lights and the stickers, but I haven’t had time to do that yet. I plan to do it very, very soon.

Would you ever buy a disused police car? Tag us @bhamnow and let us know.

Our favorite free video editor is now even more powerful