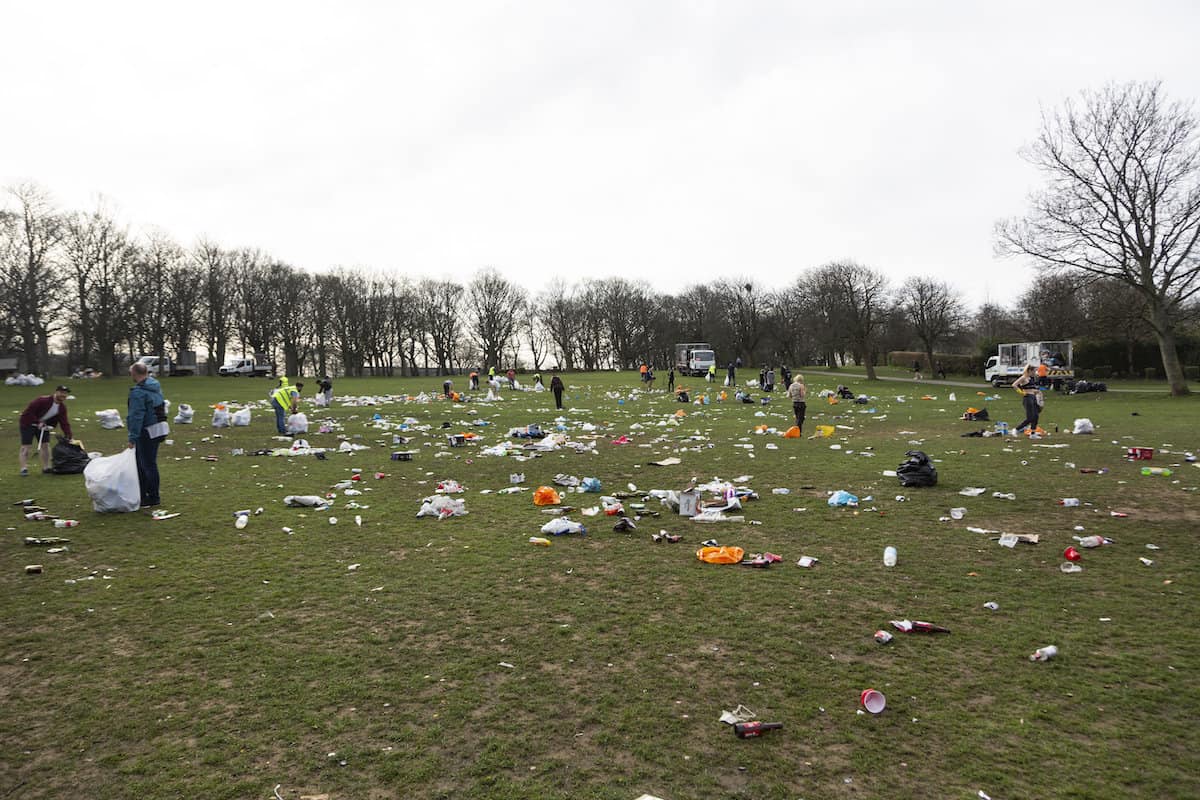 These images show the appalling state of a park that looks more like a landfill this morning (Wednesday) after thousands of sun seekers gathered on the hottest day of the year.

Thousands of revelers took to Woodhouse Moor in Leeds, West Yorks, yesterday (March 30) to celebrate the easing of lockdown restrictions and the hot weather.

However, photos taken today at the scene in the student district of Hyde Park show huge amounts of trash left on the grass by many people present.

In scenes more akin to those you might see in a landfill than in a public park, beer bottles, disposable barbecues, food packaging, and shards of glass could be seen strewn across the grass.

A council team arrived at Woodhouse Moor early this morning to begin the cleanup and are expected to stay in place until the afternoon.

Photos taken yesterday in the park showed hundreds of groups of no more than 20 people, tightly packed in parts.

Many in attendance drank alcohol, played music and organized barbecues – despite signs in place asking people not to cook their own food in the park.

The Sunseekers, on a day when temperatures reached 21 degrees in Leeds, started to gather in the morning and stayed there until late in the evening.

Although lockdown restrictions were relaxed yesterday, people are still required to socially distance themselves and stay local as much as possible.

Responding to the scenes, a spokesperson for Leeds City Council said: ‘While acknowledging that people will be delighted to meet their friends and family in our parks and green spaces given the easing of some restrictions on coronaviruses this week.

“We ask residents to always fully adhere to all guidelines currently in place. This includes the rules for social distancing and gatherings.

“This is vitally important if we are to continue to protect our health and well-being and that of others. It is important that those who have been vaccinated continue to follow the rules.

“The full impact of the vaccine on virus transmission is not yet known, so it may be possible to spread the virus, putting others at risk.

“We hope that our residents can enjoy the good weather and our amenities while respecting the guidelines.”

There were similar shocking scenes all over the country, in Sheffield Ellen Beardmore Editor, Sheffield Telegraph filmed her local park this morning.

She tweeted: ‘This is what beautiful Endcliffe Park looks like today after a day of hot weather. BBQs, clothes, bottles of liquor, and at least one wallet that people didn’t bother to bring home.

This is what the beautiful Endcliffe Park looks like today after a day of great weather. BBQs, clothes, liquor bottles, and at least one wallet that people didn’t bother to bring home pic.twitter.com/OdZgBjqR0j

Forecasters said there was a 10% chance the UK could enjoy the hottest March day on record on Wednesday.

Parts of London and the south-east will be warmer than Benidorm, Marbella and Tenerife by noon as the early spring heatwave continues.

But politicians have warned people to be “cautious” when visiting parks and beaches after large crowds were seen in public spaces on a hot day on Tuesday.

The country’s hottest March temperature of 25.6 ° C (78 ° F) was recorded in 1968 in Mepal in Cambridgeshire and the Met Office said mercury is expected to reach similar levels on Wednesday.

Met Office spokesman Grahame Madge told the PA News Agency: “There is a chance that we could see our hottest March day on record today, we predict a 10% chance let that happen.

“There are a number of factors that can prevent this from happening, as the weather will be rather cloudy in places which could turn into downpour clouds, taking away the heat.

“But it should definitely be warmer than yesterday in some areas.”