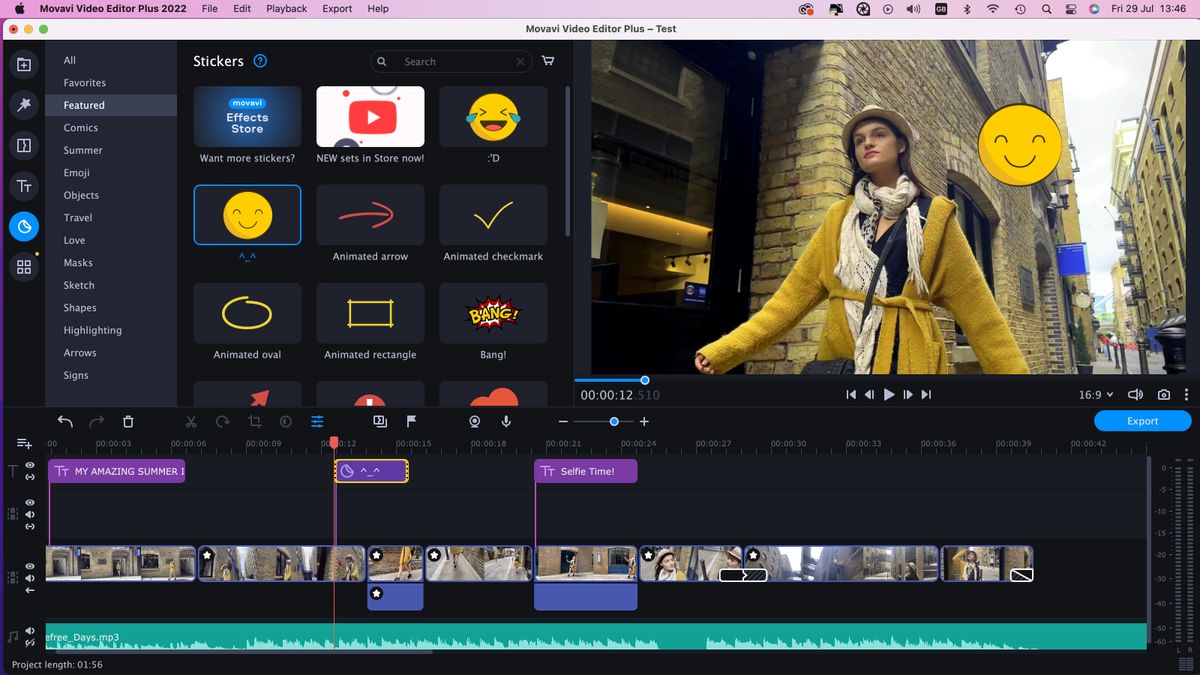 Movavi Video Editor Plus 2022 is a mid-range video editor designed for beginners and intermediate users who want to turn their video clips into professional-looking productions – and that’s a reminder of how video editing has come.

In pre-digital times, video editors had to play back their captured footage on one machine and record the right bits on another (like copying music from tape to tape). Linear editing was like composing a letter on a typewriter – you couldn’t insert new material without starting the whole process from scratch.

In the early 1990s, computer software revolutionized the task of video editing. Editors could swap the order of clips by dragging and dropping them in a timeline – hence the term nonlinear editing (NLE).

These days, dozens of NLE apps are vying for our hard-earned cash, from entry-level Adobe Premiere Elements to professional apps like Final Cut Pro and Adobe Premiere Pro. So where does Movavi Video Editor Plus 2022 fit in the pack? Is it a leader, an outlier, or somewhere in the middle? Continue reading…

Movavi has all the bells and whistles you’d expect from a non-linear video editing app, like the ability to add titles and transitions to give your program a polished finish in post-production.

However, for its relatively cheap price, it packs a surprising number of additional tools and assets, including the ability to compose green screen footage using chroma key and stabilize wobbly handheld footage. . It also has drag and drop filters and LUTs to style your footage in an instant, or you can make manual color and tone adjustments using sliders. There is also a range of audio tools such as the ability to add reverb to a track as well as adjust its EQ.

At one end of the NLE spectrum, we have entry-level apps like iMovie and Adobe Premiere Elements. Premiere Elements offers Guided Edits that take the novice step-by-step through the nonlinear video editing process. Movavi doesn’t hold your hand, but it does give you pop-ups containing little movies that explain what particular panels do.

Unlike iMovie, Movavi has object tracking, so you can have a graphic or effect automatically follow the movement of a person in the clip (see our test video for an example). Apple Final Cut Pro costs five times as much, but motion tracking was only added to its toolset last year.

If we were to place Movavi on the NLE spectrum, we’d put it closer to Final Cut Pro and Premier Pro rather than iMovie or Adobe Premiere Elements, due to its feature-rich toolset and large collection of ‘assets.

At first glance, Movavi Video Editor’s workspace looks like many of its contemporary rivals. There’s the usual bin for accessing project assets such as video and audio clips, a timeline for organizing clips in order, and a viewer for displaying edited content as your show takes shape.

Most modern NLE apps have a neutral dark gray workspace so you can focus on editing without being distracted by the interface. Movavi makes the neutral black and gray panels a bit more interesting with a subtle pop of cool blue. The lighter white text is also tinted blue, helping to differentiate it from the dull gray and white workspaces of applications such as Final Cut Pro.

Movavi’s clean and simple workspace quickly reveals hidden depths. Click on an icon on the left (such as Filters) and the left half of the screen reveals a host of sub-categories which in turn give you access to dozens of filters (about 186 effect filters compared to the collection of 169 of Final Cut Pro). As a bonus, you can purchase and download more filters from the Movavi Effects Store. This wealth of assets is also found in other panels such as Transitions. Movavi has 133 transitions (plus a link to buy and download more). The more expensive Final Cut Pro comes with fewer transitions (118.)

Movavi is a joy to use, thanks to its combination of a clean workspace and a rich toolset. Graphical animated text overlays are easy to add and they look fresh and contemporary (compared to the dated graphic overlays provided by Adobe Premiere Elements).

The chroma key tool is very effective and replaces unevenly lit green backgrounds with a click of the eyedropper tool. However, it lacks the capability to let you draw garbage mattes around the edges of the frame to make non-green areas transparent.

Once you’ve edited your footage, you can export your show to a variety of formats such as PC-compatible AVIs or web-compatible MP4s. It will also encode your footage for playback on PAL or NTSC DVD. There’s even a category to export your footage based on specific brands of big-screen TVs or format them for smartphones. Movavi even supports 10-bit ProRes HDR footage from the iPhone 13 Pro range, making it invaluable when it comes to producing high-quality edits.

A particularly nice touch is the way Movavi solves problems with transitions. In applications like iMovie or Final Cut Pro, you can only blend (dissolve) between two clips if they are long enough to include the transition. This often leads to annoying messages that one of the source clips is of insufficient duration. Movavi simply freezes the frames at the end of the shorter source clip to allow the transition to occur (see the blend in our sample test video when we transition from girl to beams as an example).

Movavi is a joy to use, especially if you’re familiar with entry-level NLE apps like iMovie or Premiere Elements. Beginners should find that the explainer pop-up videos will help them get started.

Once you’ve organized and trimmed your clips in the timeline, you’ll enjoy exploring a generous range of drag-and-drop filters and transitions that make high-end apps like Final Cut Pro stingier in comparison.

If in doubt, you can download and explore Movavi as a 7-day free trial, although any exports you make are watermarked. Highly recommended.

THE BEST OFFERS OF THE DAY