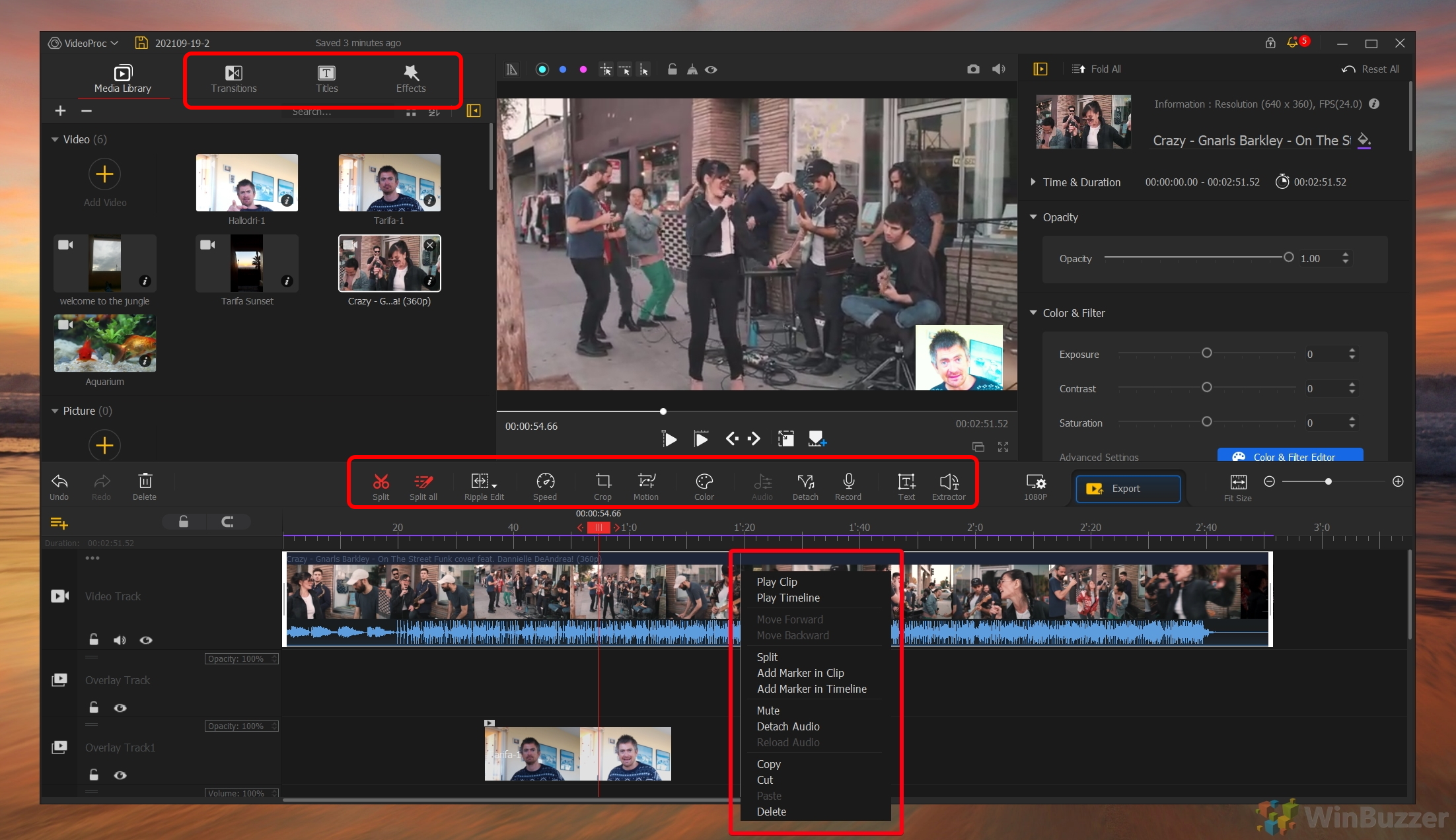 If you still rely on Windows Movie Maker as your primary video editing tool because professional solutions like Adobe Premiere and Final Cut Pro are too expensive, you might want to reconsider your decision.

Here’s our roundup of what this free video editor for Windows and macOS has to offer.

The VideoProc Vlogger interface uses a boxed structure similar to many commercial video editing tools such as Techsmith’s Camtasia.

The media library at the top left manages all the video, audio, and image files you want to use in your project. From there, all you need to do is drag and drop onto a track at the bottom. There is a detachable video player in the center and right next to it, VideoProc Vlogger will show you the options for a selected tool or feature, if there is any.

VideoProc Vlogger uses four different types of zoomable tracks which can be created on top of each other according to your needs: Cover for videos and Effect, audio and Subtitle tracks. Multiple video tracks can be easily aligned and resized or placed in the video player canvas at the top.

Right clicking on any position on a video track brings up a context menu where you can cut / split it and extract any audio included in a separate audio track. Editing tools can be found in a toolbar just above the track panel for cropping, changing speed, or adding motion or color effects.

As in the case of the crop tool, they open in a separate window showing different presets to choose from and also a preview to get a feel for the end result.

When working with audio or effects tracks, the editing tools available on the toolbar change accordingly.

VideoProc Vlogger supports multiple tracks not only for videos, but also for audio and effects tracks, which is useful for combining background music and voice recordings which can be added directly using your microphone .

There’s more to the built-in audio editor than just changing the volume and the typical fade-in or fade-out effect. You can also use effects and filters like Echo, Reverb, Low Pass, High Pass, Gain, Denoise and just sound with a built-in equalizer.

Even in the equalizer, VideoProc Vlogger surprises with great attention to detail. It offers ten frequency bands and 12 presets.

When editing your video with many cuts, over 60 transition effects that can be placed between two video segments by drag and drop are useful.

With 50 different video filter effects to choose from, you shouldn’t run out of options to make your video projects enjoyable and impactful.

As the effects can be stacked in separate tracks, you can even combine them if you want.

Once your video project is ready, you can choose the desired dimension and resolution and render it via the two buttons on the right side.

The resolution selector offers various presets for different services and devices or a custom setting.

VideoProc Vlogger records in MP4 and MKV video formats and in MP3, M4A and FLAC audio formats. Details like quality, codec, FPS and bitrate can be chosen freely.

Although Windows Movie Maker was discontinued by Microsoft in 2014, it is still used by many as the free video editor of choice.

The main reason is simply that there aren’t a lot of free video editors to choose from. It also offered great usability and the most important features for simple video projects.

With Movie Maker, you can add intro screen, credits, soundtrack, cut parts of video, add visual filters. It also allows videos to be rotated 90 ° if they were recorded incorrectly.

VideoProc Vlogger basically offers all the functionality of Windows Movie Maker as it is a complete video editing solution. It also takes advantage of modern GPUs from Intel, AMD, and NVIDIA with Level 3 hardware acceleration. This makes editing and rendering as fast as it gets on your PC.

While for beginners switching from Windows Movie Maker VideoProc to Vlogger may seem overwhelming, the software is very easy to use and well worth it.

There were basically only two things we didn’t like about VideoProc Vlogger: The dark theme for the UI which is difficult to work with in bright environments, and the fairly large minimum window size of the program. But since this is a completely free video editor, you will definitely find a way to deal with both.