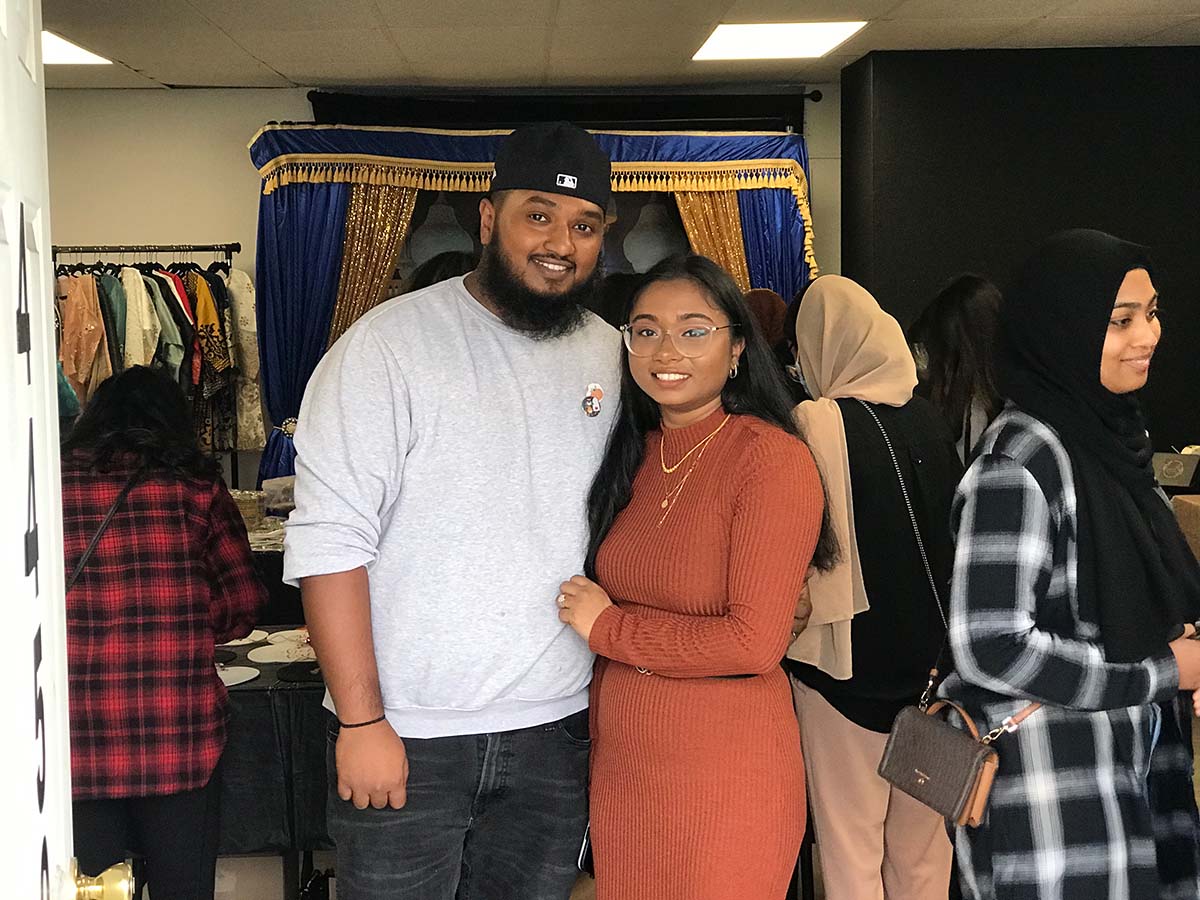 Co-owners Mohtashim Mahin and Tufail Uddin opened Thru The Lens Production as a small business hub to support others in their community.

When weddings were called off during the pandemic, videographer Tufail Uddin and photographer Mohtashim Mahin from Through the lens production lost their main source of income. They had to find other ways to earn money by taking a financial leap to fulfill their dreams.

Tufail Uddin grew up in Detroit. Like many children raised by immigrant parents, he was nurtured to grow up and have a good 9-to-5 office job. But he had other plans.

When Uddin lost his first office job, his wife Anjum bought him a camera.

“At the beginning of the year, I was in this 9 to 5 job where I saw no happiness or purpose,” he recalls.

Uddin started watching YouTube tutorials to learn more about photography. He freelanced for a while and practiced taking photos for small events to build up a portfolio. In 2018, he met Mohtashim Mahin while working freelance as a videographer.

Mahin was born in Bangladesh and moved to the United States when he was 18. He started photography as a hobby while figuring out what to do between college and odd jobs.

“I started going to different people’s weddings and started taking pictures of my loved ones,” Mahin says. “That’s how I started.”

Mahin says talent was not enough to make it far in the industry. He realized that people were hiring photographers and videographers as part of a package, which sparked an idea: unite with Uddin.

“I contacted him in 2018 and we met at Tim Hortons…” recalls Mahin. “I took everything with me, all my camera and everything and he was like, ‘Okay bro, let me think about it and I’ll get back to you.'”

Uddin says he wasn’t sure about taking the plunge. A few months passed and they crossed paths again while working for the Bangladeshi Mural Project, a crowd-funded mural honoring Bangladeshi heritage in America displayed at the Hamtramck-Detroit border.

They became a team in December 2019. Then in 2020 their entire operation stopped due to the pandemic.

Uddin says this sudden pandemic-related shift caused him to rethink his priorities both as a business owner and as a new father. Her son was only a few weeks old when Michigan went into custody.

“My income and my family’s financial well-being depend on the world, don’t they? Uddin said. “Like the pandemic hadn’t happened, and I could have continued working.”

Uddin wanted to take a step closer to pursuing his dreams by opening a studio to work outside the home and be more present at home. He says his wife Anjum gave him the comfort he needed.

Creative jobs are often not supported in the South Asian community, but rather seen as hobbies. Uddin says his wife helped him overcome these obstacles and believe in him.

“Just listening to her is good enough for me to go out and do what I have to do,” he says.

Things started looking up in 2021. In August, Uddin and Mahin found repair space to rent in Warren near the Bangladeshi community, one of their biggest customer bases.

“We really wanted this space to be primarily for us to be creative, to make that dream more serious to become more of a photographer and videographer and explore different avenues and bring in other creators,” Uddin says.

One of the things they explored was doing commercials. Yasmeen Ahmed is the owner of Adhor, a gift wrapping company. Uddin helped create a video for his online business. It was widely shared.

“I met people through the video, so I thought it was really cool – the exposure she got,” Ahmed says.

Ahmed met Uddin and Mahin in 2018 during the Bangladeshi Mural Project. She says she is proud of them for chasing their dreams.

“I just feel like they were very brave, very brave to go ahead and open this studio during a pandemic. It shows how passionate they are about their work,” she says.

Listen: Thru the Lens Production is making room for local creatives in its physical studio.

Freelancers at the Small Business Center

Mahin says he was nervous about taking a big financial leap, especially being a provider for his family, like Uddin, but the money from the events they organize helps cover their bills.

Uddin says he hopes the studio will become a safe space where businesses can come together to create content or connect people to resources.

“We want to be a one-stop shop or at least help you find the right person to help you,” Uddin says.

“It gives like small businesses, especially businesses starting up during COVID… a little platform other than Instagram,” Uddin says.

He says it’s important to create networks for people who need connection, support or a mentor.

This year, TTL Production supplied around 40 events, including small, intimate weddings. Kamran Hussain and Fahmida Parvin hired TTL Production for their wedding in June. Hussain says he grew up with Uddin. He trusted the duo to capture their special moments.

“Alhamdulillah, we were able to get everything we needed with photography. Tufail and Mahin were actually very cool with our budget,” says Hussain. “They worked around it and even helped us whenever we had questions.”

Hussain says TTL Production shows the growth of the community – from brick-and-mortar freelancers.

“We are still a small community,” says Hussain. “So if one of us had something like a studio for example and they’re willing to loan it out to other small businesses, that shows you how strong the community is and how high we’re growing. each other.”

Uddin says this year has been tough but has provided new opportunities like traveling to nine states for work.

Mahin says opening a business was worth it. He says people who doubted him have now changed their minds.

TTL Production was unable to provide services during the height of the pandemic due to delayed and canceled weddings. But the loss of business gave co-owners Tufail Uddin and Mohtashim Mahin a chance to create their own safe space to work, thrive and use their creative talents to earn money.

What seemed like an end has become a new beginning.

Reliable, accurate, up to date.

WDET strives to make our journalism accessible to everyone. As a public media institution, we maintain our journalistic integrity through the independent support of readers like you. If you value WDET as a source of news, music, and conversation, please donate today.